No items found.
Product is not available in this quantity.
The SparkCom Blog
<< Back to Community<< Back to Blogs 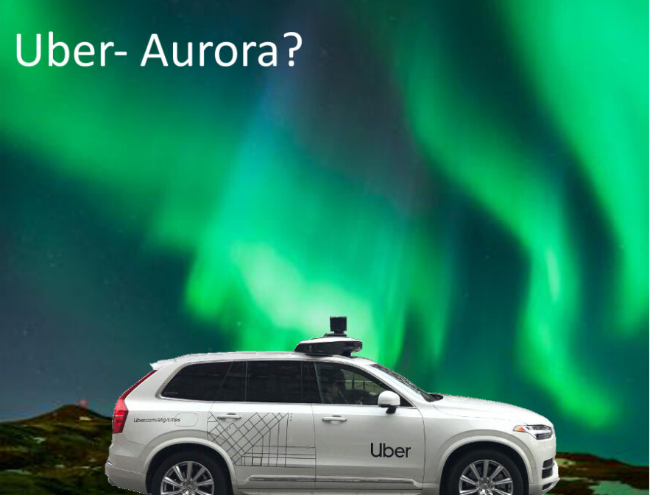 On December 7, Uber announced it is spinning out its autonomous car development effort to a new company- Aurora. On December 8, NASA announced a large flare from the sun was going to produce auroras over the northern hemisphere. NASA’s solar flare fizzled and there was no light show. What about Uber’s Aurora?

After spending what was likely a billion dollars on development, Uber is pushing its AGV out the door, along with $400 million, to be a separate company all on its own named Aurora. After a lot of development, serious steps forward in self-driving technology, and some problems, Uber is simply walking away. Expensively. It begs the question “what went wrong.”

The #1 problem with this investment was created at the outset. What is Uber’s value proposition? That was at the very least complicated, and at the worst never quite clear. Uber was always supposed to be a lot more than an alternative to taxi and limo services. Ostensibly Uber was a tech company that matched up unused resources with people who could use those resources – which is why Uber is often lumped into discussions with AirBnB. Both are supposedly tech companies that allow the unleashing of locked-up value in underused resources to marginal users who could benefit from the marginal increase in resource capacity.

If that’s the case, why would Uber invest in autonomous car technology? That’s what went wrong. People driving their own cars as gap-filling cabs is a value delivery mechanism. It is one use of the technology in one application. The value of Uber is supposed to be its matching technology with some elaborate pricing capabilities (surge pricing, for example.) But autonomous cars were an improvement in the delivery system – an effort to eliminate the costly driver and thus compete more specifically against taxis in ferrying around people. Uber confused its Value Proposition with its Value Delivery System – and thus it made huge investments in the latter when it should have remained focused on the former.

Uber needs to refocus on its Value Proposition.

How can Uber help me unlock value in my underused resources? How can Uber help me get better access to resources, help me access underused resources? Neither of those are met if I have to turn my car into an autonomous vehicle, at my own cost. In a way it actually defeats the Value Proposition, because rather than unleashing locked-up value in my resource (car) it causes me to invest in technology I don’t need and may not even want. And as an Uber user I get no additional value from the car being driverless – that doesn’t inherently help me meet my needs any better. Overall, autonomous vehicle technology really misses the point of the Uber Value Proposition.

They should never have invested in autonomous vehicle technology. Leave that for someone who identifies a very real unmet customer need that is fulfilled with an autonomous vehicle. The leadership of Aurora first and foremost have to define their value proposition – and then figure out how to deliver that value with their technology. Nobody succeeds by inventing a technology that solves no real problem – that’s how you get Segway! Or the Amphicar that turned itself into a boat. Instead, you identify the need then develop the delivery mechanism to fulfill that need.

Do you know your Value Proposition? Can you clearly state that Value Proposition without any linkage to your Value Delivery System? If not, you better get on that pretty fast. Otherwise, you’re very likely to end up like encyclopedias and newspaper companies. Or you’ll develop a neat technology that’s the next Segway. It’s always know your customer and their needs first, then create the solution. Don’t be a solution looking for an application. Hopefully Uber and Aurora will both now start heading in the right directions.